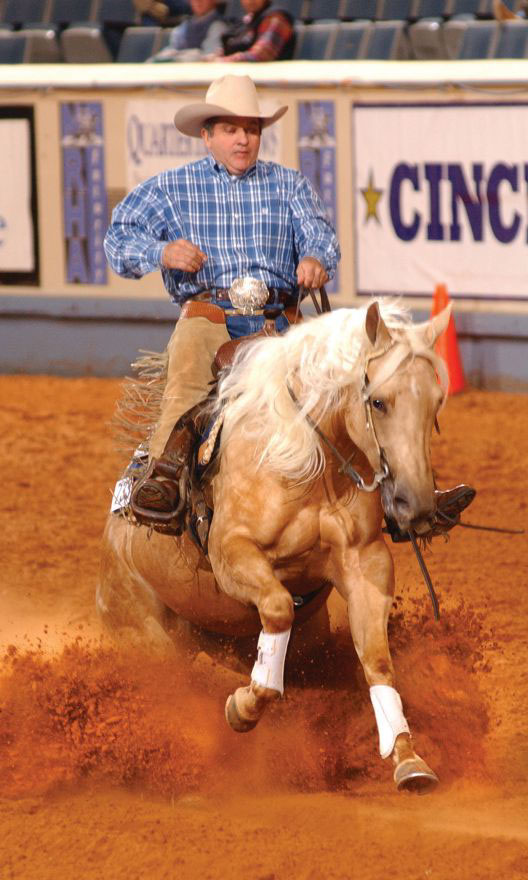 David Silva receives the lifetime achievement award for his 30-plus years of dedication to and accomplishments within the sport of reining.

“I’ve never set a goal, I just enjoyed reining and went into different aspects of it—raised horses and trained horses,” said David Silva. “You look back and see there have been some accomplishments, but I never had any special goal except to raise nice horses and enjoy our sport.”

He might not have set out to receive the Dale Wilkinson Lifetime Achievement Award, but his extensive list of accomplishments in and dedication to the reining industry make him an ideal candidate. Receiving the honor, which has been awarded annually since 2007 and is supported by the Reining Horse Foundation (RHF), was a humbling experience, he said.

Each year, the NRHA Board of Directors and past Hall of Fame inductees vote to approve a worthy candidate for recognition. The award honors legendary reining horse trainer Dale Wilkinson, who’s known as the “father of reining.” Wilkinson was the first inductee into the NRHA Hall of Fame, is a multiple NRHA Futurity champion, and was one of the founding members of NRHA.

Naming the NRHA Lifetime Achievement Award after Wilkinson was appropriate, since he was an educator, promoter, and mentor to all reiners—both professional and non pro—who exemplified how riders should conduct themselves and train and exhibit their horses. Now, thanks to Silva’s decades of reining accomplishments, the Pilot Point, Texas, horseman has been likened to Wilkinson’s example and can add a new feather to his hat.

Silva and his wife, Bonnie, have supported NRHA for more than 30 years. They have competed, bred, and owned reining horses and consistently supported entities including NRHyA and RHF. For Silva, sponsoring NRHyA was particularly important because of the impact those youth members can have on the future of reining.

“You’ve got to support the youngsters because they’re going to be taking over and becoming our next competitors and champions, so I think it’s important that we support that,” he said.

“I was involved in the [CRHA] for quite a few years,” Silva said. “We promoted one show a year, and that really helped our area. We wanted to try and keep reining alive on the East Coast in our little area of Connecticut and Massachusetts.

“We were just trying to be supportive of that area and trying to keep the reining growing because it’s a difficult area,” he continued. “There’s not a lot of trainers in Connecticut or Massachusetts, so we just tried to do what we could to promote it and get people to attend the shows.”

Silva has also seen great success in the breeding and owning side of the industry. His name is synonymous with Hollywoodstinseltown, a recent NRHA Two Million Dollar Sire he bred and owns, but he’s had many great horses walk through his barn.

“My biggest accomplishment was probably raising quality horses like Hollywoodstinseltown and Gunners Tinseltown, and having Miss Tinseltown, a Hall of Fame mare,” Silva said. “Those are really special. He’s [Hollywoodstinseltown] over the $2 million mark, so that’s very gratifying to see a horse you bred and raised be able to go on and be a sire.”

Silva has also bred, raised, and shown other top horses like Footworks Finest, Hollywood Downtown, Shiney Workboots, Great Footwork, and Reminic N
Dunit, helping him become the sixth person to join the NRHA Million Dollar Owners list in 2012. He bred Americasnextgunmodel, who was the 2012 NRHA Futurity Level 4 Open Champion—the same year Silva’s Gunners Tinseltown took Reserve. Both Hollywoodstinseltown and Gunners Tinseltown were ridden during their careers by NRHA Hall of Fame member and Three Million Dollar Rider Tim McQuay, among others. Silva said McQuay has been a guiding star throughout his reining career.

“Throughtheyears, alotofmysuccess has really been with the guidance and help of Tim and Colleen McQuay,” Silva said. “You can’t mention reining without his name coming up. I can’t say enough about how much those people have contributed to our sport. I’ve been a customer of Tim’s for many, many years, and they just know the business end; they know horseflesh, and I can’t make a statement without saying how grateful I am and how much respect I have for those people. They’re still involved in the industry, and I don’t know of anybody who’s contributed more.”
Even with this latest recognition of his accomplishments in the industry, Silva has no plans to slow down. Because of his hard work and devotion, he’s a prime example of the dedication to and support of reining and its continued growth that the Dale Wilkinson Lifetime Achievement Award embodies.

“I just want to try to stay involved and keep breeding horses and showing,” Silva said. “Try to be competitive, and support the sport as much as I can.”