Hip #2005, Smartspooktinseltown, garnered a final bid of $80,000 from leading buyers Geir and Jill Ramleth. Consigned by Leonardo Guimaraes, the palomino colt had been in training with NRHA Professional Gabriel Diano and was a standout in the performance preview. Sired by Hollywoodstinseltown -earner of $185,886 and sire of offspring nearing the $1,000,000 mark – Smartspooktinseltown’s dam is Snap Crackle Spook, sired by NRHA Hall of Fame inductee and NRHA Three Million Dollar Sire Smart Spook.

Hip #2021, Makeit In Hollywood, was the second high-seller of the sale. The red dun colt was purchased by successful Non Pro rider Julie Ridgeway for $88,000. Consigned by Prospects Unlimited, LLC, the colt had been in NRHA Professional Jonathan Gauthier’s program and was also sired by Hollywoodstinseltown, sire of four offspring in the sale that sold for an average of $60,500. The colt’s dam, SR Mischief Maker (Holidoc x SR Oakies Lena) is the producer of 15 foals, several being outstanding performers and producers. These include Make It With A Twist, earner of $110,338 and producer of high-earning offspring, including Gotta Twist It Up, who was ridden by breeder and owner Sandra Bentien just a few hours earlier in the Cinch NRHA Non Pro Futurity finals, winning over $62,000 when the duo won the Level 3 and Level 2 Non Pro championships and placed fourth in the Level 4 Non Pro.

After the sale, buyer Julie Ridgeway said she had been eyeing Makeit In Hollywood prior to the sale. “I liked his looks a lot and his maneuvers in the video. We also had an opportunity to try him prior to the sale, which was very helpful. Eventually, he will be a non pro horse for myself, but I think it will give the best opportunity to be successful if I stay off of him his 3-year-old year!” Julie laughed, adding that the colt was headed home with NRHA Million Dollar Rider Brian Bell. “We’ve watched him work here and I love this horse’s personality; I visit him a lot in the stall. Like a lot of non pro buyers, I like to feel a connection with my horses, and he’s really easygoing and loveable.”

If you are interested in breeding to this proven stallion, contact McQuay Stables by phone at 940-437-2470 or via email at McQuayStables@gmail.com. 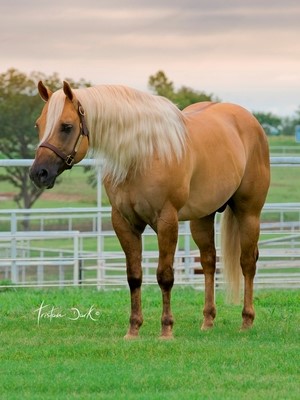